I was Dominar!  Tyrannical, near immortal ruler of over four hundred galaxies!  Now I’ve been mind-napped and held captive in an alien prison, forced to do unspeakable acts as their slave.

I will not break!  I will escape!  I will have my revenge!

Important Note: This is an extremely adult tale, not for under 18s.  It contains graphic language, sex scenes, violence, torture, abuse, basically all the good stuff. 😉

Do not purchase if these sorts of subjects are not your thing! 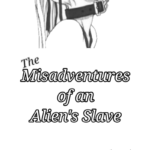 This is about as tame an excerpt as I could find…

We spent a comfortable hour or two in bed, giving each other pleasure, and then I insisted we go back to the pool to finish our swim.

Echo agreed, giggling at my audacity, and we climbed out of bed, dressed ourselves and once more made our way to the pool, where we spent one of the most pleasant afternoons I can remember, just messing about and swimming, sometimes both at the same time.

Later on Echo went behind the bar and served us some drinks.

“I’m not supposed to,” she chuckling as she passed me a glass of red liquid, “but I think we deserve it.”

I didn’t disagree, and so we sipped at whatever the liquor was as we canoodled on one of the sun loungers next to the pool, finally falling asleep in each others arms.

Waking up to a bright light shining down on me then, wasn’t the best way to regain consciousness. Someone was above me, although I couldn’t see who because of the illumination blinding me.

I didn’t have time to reply before some large, gloved hand clamped itself over my mouth. Other, unseen, hands grabbed me and hauled me upright. I heard Echo squealing behind me.

For a moment I thought it was Frigid, coming to take revenge, but then a gruff voice spoke.

“What about this one?” it said.

“Take her too, she looks like she’ll be a good time,” a female voice replied.

I tried biting the hand on my face, but it was suddenly taken away and replaced with some foul tasting cloth that was shoved into my mouth, followed in short order by a bag that was pulled over my head. The gag was fairly loose, so I immediately began trying to eject the thing. My wrists and legs were efficiently bound in some manner, my hands behind me, and I was carried along at a jog. Now I could hear the high pitched wine of an anti-grav engine.

“No shit,” someone else muttered, as I was thrown onto a hard surface.

There were some popping sounds around us, and a cry. “I’m hit!”

Sounds of some kind of weaponry then, followed by a the engine increasing power, and we were pressed to the floor as we shot into the air. The shooting continued for another few seconds before we banked hard and accelerated away, just as I managed to spit my gag out. I took a few deep breaths of, well, still musty air.

“Everyone okay?” asked the female voice.

There was a round of acknowledgements.

“Excuse me, if you could let us off here, we’ll be on our way,” I called out.

The reply was a kick to my fanny.

“Shut up slut,” the female said.

Have no product in the cart!
0